← more from
On the Corner 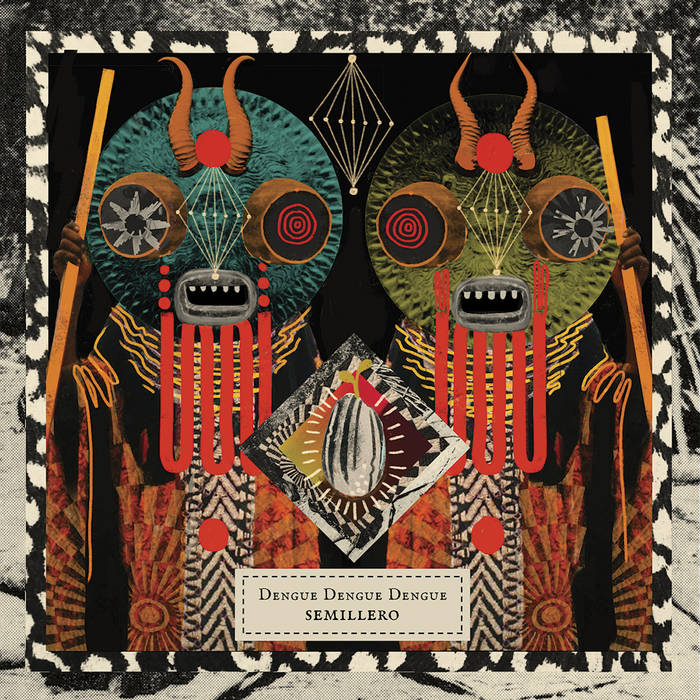 Sarah Sexton 510 I've listened to this track countless times and still not over it - every time I notice something new and fascinating! Get it kitty. Favorite track: Pua ft. Penya.

José E. Plata M. It´s an album which shows an evolution and a different perspective of how latinamerican artists offer electronica and root sounds.

Dengue Dengue Dengue are the Peruvian duo known for raising a tropical storm. Their electronic psychedelia and bass flows from their roots in Lima, Perú upstream to global dancefloors. The duo are constant in their evolution, exploring rhythms and sounds native to Peru and from the world over. Their focus is in recreating them in electronic form, mixing the old with the new, analog and with digital.

In owning their unique sound and visual identity they share a common quest in their pairing with London-Global label On the Corner. Already deemed ‘Label of The Year’ at the Worldwide Awards On the Corner are crossing more borders and breaking down the silo of left-field sounds having now been nominated for the ‘Best Small Label’ gong at the prestigious AIM Awards.

Gilles Peterson's 'Worldwide Premieres' called it back in summer 2016 saying that the label is “On a never-ending quest to support and expose far-off musical cultures around the world”. On the Corner continues to leave no stone unturned.

In this 6-tracker Dengue Dengue Dengue team-up with label mates Penya. The band feature on the first track ‘Pua’ that sets a rich scene for the sonic journey ahead. The flip is stormed with title track ‘Semillero' whilst hearts, minds and imaginations are set to be inspired with their versioning of ‘Habu Raminibu’ which is a healing chant of the Huni Kuin people whose ancient home is located deep in the Amazon where the borders of Peru and Brazil meet. The collaboration between artist and label seeks to honour and represent this heritage. The Huni Kuin have bestowed guardianship of this rare cultural treasure to Dengue Dengue Dengue and On the Corner.

’Semillero' is music that moves souls, allows imaginations to flourish and the feet to follow.

The spiritual concept running through this mini album/E.P is summed up in the meaning of title track’s name. ‘Semillero’ is an incubator or seed. A place where new generations of life, culture and talent is nurtured, initiated, and bestowed with precious responsibility and knowledge. A place to keep, nurture and grow the seeds of the future.

A1 ‘Pua' Feat Penya: This track is one of Dengue Dengue Dengue's first online collaboration. ‘Pua' morphed several times until the sources became translucent. The production culminated from several diverse influences all being driven together by the triplets of the time signature.

A2 'Eye Acucho' ft. Mikongo: Miki Gonzales aka Mikongo is a musician possessing a long heritage in Peru. His legend is that of an innovator who brings traditional Peruvian music together with electronics and rock.
Mikongo has recorded a vast amount of music and instruments that are all fastidiously documented. Dengue Dengue Dengue were honoured to be given access to Mikongo’s private archive and sound gallery. The Arp and Charango recordings in this track were made in the historical city of Ayacucho, a city located in the Peruvian Sierra that has rich musical traditions.

A3 Ayani Huni Kuin - 'Habu Raminibu' (Dengue Dengue Dengue & Joutro Mundo version)
On a trip to Brazil Dengue Dengue Dengue worked with Jonas Rocha to create a track that incorporates the recordings Jonas had made with the amazonian 'Huni Kuin' tribe. The tribe's chants are known to be healing and this production reaches across the physical worlds towards the spiritual realm.

B1 ‘Semillero' ft. Mikongo
'Semillero' brings together Andean flutes, electronica and afro-peruvian music. Dengue Dengue Dengue sense a parallel between the evolutions of afro-peruvian music and modern Angolan producers like 3beatz Musik and Dj Deivix. They open this idea up and lay it bare, with the sounds on ’Semillero’ depicting the migration of Andean people to the coast of Peru where the influence of afro-peruvian music continues to develop. Sounds from Mikongo’s archive feature on this title track and help to shape the concept of the e.p. 'Semillero' is like an incubator, a place where new generations of life, culture and talent are nurtured, initiated, and bestowed with precious responsibility, knowledge and responsibility. A place to keep, nurture and grow the seeds of the future.

B2 Dileke
With many influences ‘Dileke' is a difficult track to locate. As a micro-cosom of unique ingredients from eclectic and singular sources. Amongst sampled celebratory chants from East Africa and synthetic atmospheric pads that bring a taste of European production, lies a percussive-heart beating with the unusual pairing of cumbia and hip hop sampled from the sounds found at the historic Zocalo, public square in Mexico DF.

B3 Haarp
Dengue Dengue Dengue were inspired to make this track as a homage to Muslimgauze after they were blown away when hearing his productions for the first time.

All tracks composed by Dengue Dengue Dengue except Habu Raminibu. Performed by Ayani Huni Kuin, composed by Povo Huni Kuin with percussion by Gabriel Carneiro and post production by Jonas Rocha from Joutro Mundo. Samples featured in ‘Semillero' and 'Eye Acucho’ were from original sound recordings made by Miki Gonzalez. Mixed at Qmulus Sound. Mastered at The Carvery.

Bandcamp Daily  your guide to the world of Bandcamp